Guest blogger Cindy Craft is here to share her experiments with using a Circular Sock Machine to knit single ply socks. She also uses a flatbed machine for color work using singles. If you’ve ever wondered about knitting machines, we think you’ll be very inspired by her post!

I’m a hand spinner. I spin every night; it’s the way I wind down at the end of the day. As a result, I make a lot of yarn – there are several blanket chests in my house full of handspun yarn.  I knit with my handspun yarn but I spin much faster and much more often than I knit.  Several years ago it occurred to me that unless I wanted to die with a small mountain of handspun yarn, I needed to find a way to use my handspun faster. A sock in progress on Cindy’s CSM.

Circular Sock Machines had been on my radar for many years, but I was reluctant to buy an antique as they’re expensive and not always functional, so I had never purchased one. Then one day I was vending at a local sheep shearing show and a vendor a couple of booths down had a CSM that they were demonstrating – and not just any CSM but a new CSM! So I marched down with a small skein of handspun to see if it would knit on the machine. It did, and within a month we had our own CSM and I was happily using it to knit socks out of my vast supply of handspun. On one of the Ravelry CSM forums I encountered someone who was knitting socks on their CSM from handspun singles. This blew my mind, because I had always been taught to ply my yarn for knitting. I had always thought it might be possible to use singles for weaving but never for knitting – there would just be too much biasing of the knitted fabric. I figured I’d give it a try; even if it was a disaster I wouldn’t have invested more than a couple of hours to make the socks.   The resulting socks were just fine. If I looked carefully I could see that the loops were not quite even but the resulting fabric wasn’t twisted or misshapen. If you look at the photo to the right, you can see that the right side of the knit loops is narrower than the left side but the shape of the socks themselves is even and not twisted.  These socks were made from handspun singles of 50% wool of unknown breeding and 50% alpaca that I processed from raw fiber. This photo was before washing. To the left is a photo of three different pairs of socks I made using singles yarns on the CSM. In this photo you’ll see three socks all made from handspun singles and knit on the sock machine. These are all socks that I have been wearing and washing by hand for at least a few months.   The striped sock is made from a BFL x Romney fleece and was dyed – there is almost no biasing of the stitches present in that sample.  The blue sock was made from a Dorset x Southdown.  It might be 50/50 or 25/75 as it came from a fleece from a local flock but I don’t know which sheep. There’s lots of biasing in this sock to the point where you can actually see the stitches twist on the sock. The third sock is undyed Romney with a bit of sparkle blended in.  This is the oldest of the three socks and you can see some of the wear in the right hand corner.  This pair is starting its third year.  I spun and knitted these socks in very similar ways – the only real difference is the wool type used. The black and white hat is made from a black Shetland fleece, and I think the white is probably some of the Dorset/Southdown cross fleeces I got in 2014. I am hard pressed to see any biasing in this knitting. The blue and white mittens are made from the 2015 Dorset/Southdown cross fleeces, and the biasing is more visible in this knitting.  Perhaps the all over pattern in the black and white hat helps to disguise any biasing that may be present.

Do you knit with singles? Have you ever used them on a knitting machine? What have your experiences been? Meet Cindy: Spinning is at the core of what I do but yarn is not a finished object so I’m always exploring new ways and tools to use my yarn. You can see more of the ways I use my yarn at our website, www.subitofarm.com. A Little More About Consistency PLY Away Winners and Registration 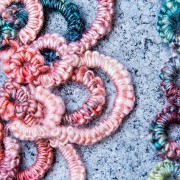 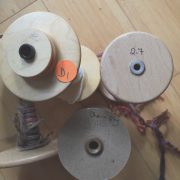 Spinning Confession: I Write On My Bobbins

The Power of Creation!
17 replies

Spinning for Something Big

A Spinning Wheel in Good Working Order
Scroll to top